Together with the artists Vibeke Kjellingland, Anne Bævre Espeli and Guy Sardinoux, Mai Cheng presented her paintings and talked about art with Torkil Baden at Beachcomber French Riviera on Saturday the 22nd of February.

Mai Cheng talking about art during her exhibition in Hegdehaugsveien 32 in the center of Oslo. She had 28 new paintings on display until the end of October 2018. 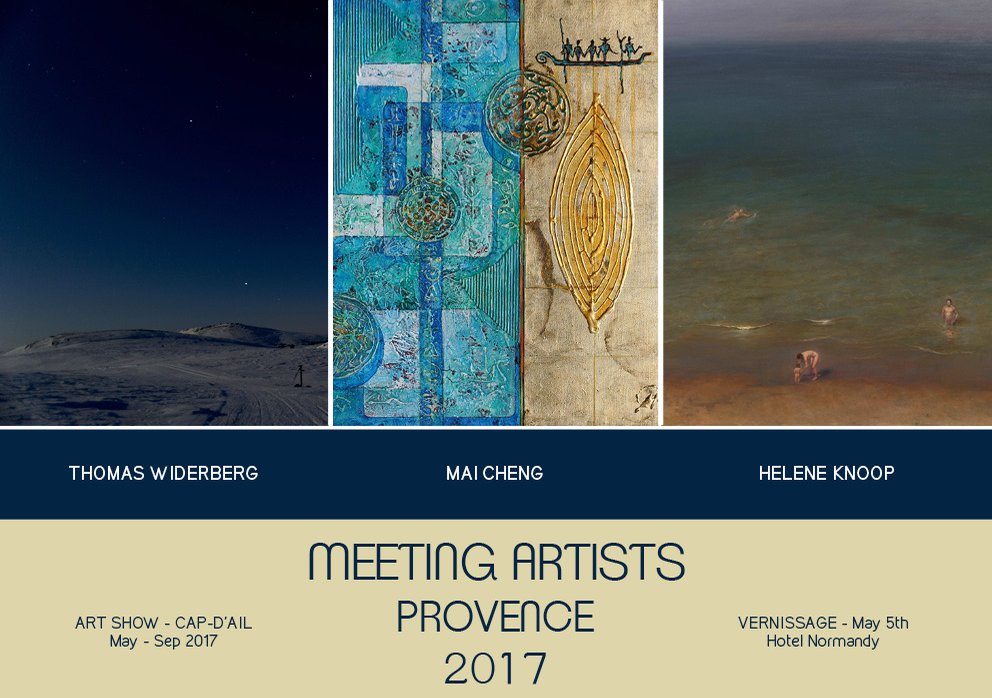 Three Norwegian artists with connections on the Riviera, Mai Cheng, Thomas Widerberg and Helene Knoop, will exhibit together in Cap d'Ail, next to Monaco.

Vernissage and sparkling reception with artists attending in Hotel Normandy, 6 allée des Orangers, 06320 Cap d’Ail, from 6 to 8 pm on Friday the 5th of May 2017.

Mai Cheng opened her solo exhibition in Bærum Art Association Saturday the 17th of September. At the exhibition, 25 of her new paintings in various formats were on display.

The week before, on Thursday the 8th of September, Mai Cheng gave a talk on Feng Shui Art in an environment with exeptionally good feng-shui - in "Labrostua", next to the Labro waterfall about 5 kilometers south of Kongsberg. 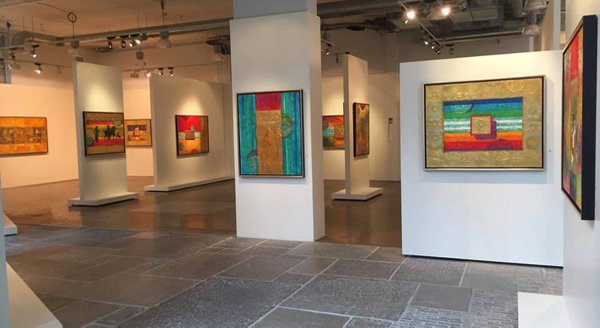 Mai Cheng exhibits in Cannes and Oslo during fall of 2015:

On Saturday the 7th of November Mai Cheng opened a solo exhibition in Cannes, France, at Galerie Espen Artdenor. The exhibition ended the 4th of December.

After four years of work, Mai Cheng opened a new exhibition in Oslo on the 17th of October. It took place at Rådhusgalleriet (Oslo Town Hall), and it ended on the 28th of October. The show was a huge success with hundreds of visitors and 21 major paintings sold.

This art fair, which took place from January 21 through January 25 is considered the most important in Florida after Art Basel, Miami, and this year it opened for the 18th time.

At its boot in the center of the fair, the German gallery presented Mai Cheng's work from 2014.

Chinese press - both newspapers and television - interviewed her during the exhibition. See the photos by clicking on picture to the right: 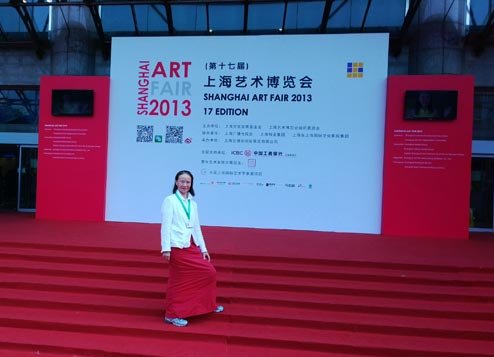 Mai Cheng's solo exhibition in the town hall of Oslo closed on the 20th of November. We got to see 52 paintings produced with oil, acryl, resin and metal on canvas. This time, she used not only alloy, but 22, 23 and 24 carat real gold. Most of the paintings came from her studio in France, but with themes from all over the world and from all of our history.

Following a request from Innovation Norway Mai Cheng was involved in evaluating the proposals to the Norwegian pavilion at EXPO 2010 in Shanghai. Five different projects participated in the competition. "It is my pleasure to announce the winning concept!" said Sylvia Brustad, Norway's Minister of Trade and Industry, at a ceremony in the National Museum of Architecture. "The artist Mai Cheng has said of the winning entry that the surface of the pavilion creates waves that in Feng-shui is called "the dragon's back", Brustad added. "It gives us associations to water in motion. In China, this is a symbol of wealth and harmony. Feng-shui, which literally means "wind and water", involves seeking to build something that fits into nature. This is the point of winning concept, The Nature of Norway."

Mai Cheng's previous exhibition in Norway, which took place in Hamar Sagbladfabrikk, lasted until the end of February 2009, and was reviewed in the local newspapers, Hamar Arbeiderblad and Hamar Dagblad.

Many of the paintings had "water" as their theme, meaning that she had picked up an old thread: "The characteristics of water", an exhibition which was on display in Paris in 1994 and in Oslo in 1996, contained many of the same elements.

The experience of nature and the metaphysical quest that characterized her work in the middle of the nineties have however been replaced by greater clarity and depth. These compositions often consist of strong, geometrical shapes, and they bring out the spontaneous and beautiful calligraphy that dominates the surface of her pictures.

Said about Mai Cheng in China:

”The Central Academy of Arts in Beijing was closed during the Cultural Revolution. In 1977, when the Academy was reopened, more than 2000 applied. Mai Cheng was one of them, and she was also one of 20 who was admitted.

She and the other 19 in the so called 'Class of 77' have today become respected artists, not only in China, but all over the world. More than half of them are living and working abroad.

Mai Cheng chose Norway and France, but her art is even more international. The ideas she is exploring in her paintings - ideas about the relationship between text and picture, symbols and archetypes, as well as the continuing dialogue between the past and the future - are not related to any specific place. With basis in various cultures, she is telling stories in a language which is so aesthetic that everybody can understand it.

In many ways the so called 'class of 77' represented a turning point in Chinese art history: For the first time, originality was just as important as proficiency. Many of the artists who came forward in the eighties, went way beyond our traditions. This is why a new golden age has started - yes, some even say that we are witnessing a second Cultural Revolution in China. But this time it's a real one.” - Wen Xue-Li, Beijing

Dagbladet's art critic, Harald Flor, wrote that "long journeys into remote cultural sources have given her paintings a hybrid character.

The harmonious blend of elements that characterize this exhibition in Galleri Asur is a contrast to the sensational mixture we saw in the "Hot Pot" manifestation this summer. While the other Chinese artists tried to combine elements of current interest, Mai Cheng Zheng has succeeded in joining archetypes according to the old saying: "Everything floats". Here the magic masks of pre-Colombian Maya-culture are neighbors of Chinese calligraphy, and Egyptian hieroglyphs are joined by the classical stamps of old Chinese art.

Mai Cheng Zheng not only masters the art of calligraphy, but she understands the picture behind the writing. And therefore, when we see the visually recognizable bowman from the Zen-philosophy being transformed into a sign that symbolize the same idea, it is bound to fascinate the trained eye of a Westerner. The same can be said about the picture in which an imperial equipage through dynamic calligraphy is being transformed into the sign meaning a carriage - the flight over the canvas arousing associations of sculptural masterpieces like the flying bronze horses of China's past," wrote Harald Flor in his review.

About her exhibition in New York:

"In her most recent exhibition at Noho Gallery, in Soho, the first thing that strikes one about Mai Cheng Zheng's work is the balance that she achieves between contemporary immediacy and timeless beauty. In paintings at once funky and elegant, her use of fragmentary figurative imagery and graffiti-like scrawls and signs within largely abstract color areas can recall no less an enfant terrible of the untrammeled gesture than the late Jean Michel Basquiat", wrote the art critic Byron Coleman in Gallery & Studio. "There is an impulse toward the sumptuous and the exquisite that moors Mai Cheng Zheng's work not in the monochromatic Literati tradition, from whose gestural vivacity certain Abstract Expressionists drew inspiration, but in much earlier 8th century Chinese tomb paintings, with their combination of delicate linearity, earthy mineral colors, and tactile fresco surfaces. Her use of vibrant reds, gold hues, and glistening blacks, in combination with more subdued colors, harks back, too, to the lacquered opulence of the Tang dynasty. "

About her exhibition in Paris:

"Cheng has developed a unique visual vocabulary that incorporates bold strokes and elemental symbols from the beginning and depth of language. These elements appear in frequent combination with Chinese calligraphy that varies from the tightly formal to ephemeral and vaporous. Her use of color is equally striking; it is often simultaneously subtle and dazzling. At other moments, one feels that the coolness of Norway has washed across her palette. Thus, as elements of line, language and color coalesce on canvas, our eye passes through the physical encounter, and the deeper image of the master narrative is imprinted on our consciousness,” wrote Roy Williamson about Mai Cheng's exhibition in Espace Bateau Lavoir in Paris.

"In some of Cheng's works, one finds an unusual translation of vertical space that is derived from traditional Chinese art. This treatment of space is heightened by the inclusion of a single vertical line of calligraphy.

A sexual dynamic can also be present; a primal black line may plunge through a blue field. Or, order is inverted on another canvas - rhythm continues in a different mode, and we are reminded that yin and yang are but two aspects of one nature.

Disturbing, elemental, eroding, forthcoming, reflective and unveiling - these are all aspects of water, and attributes that are also to be discovered in the visual master narratives of Mai Cheng Zheng," wrote Roy Williamson.

About her exhibition in the National Art Museum of China:

”Cheng Zheng is educated in Europe, and in many of her paintings we can sense the landscape of northern Europe," wrote the art critic Zhang Zhaohui in the periodical Culture in Beijing. "Under and behind it all is the northern expressionism, but at the same time she uses calligraphy and the Chinese ink painting as a second leg to stand on. The outcome of this spiritual mixture is that the paintings gain both depth and breadth. Like children of two very different parents, they have to find their own style, and it seems to me that they have succeeded. The artist has created something new and different. She has given birth to something we formerly did not know, and her creation makes the problems we usually have to deal with in this respect seem both empty and a little meaningless."